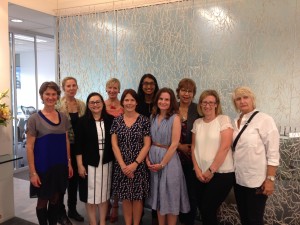 It was on our bucket list so when the opportunity came up we jumped at the chance to visit New Zealand. Since my husband would be speaking at a conference, and New Zealand is where they filmed some of my favorite movies, I thought I would reach out to the WIFT NZ chapter and see if any member would like to meet for coffee or lunch.

Much to my surprise WIFT NZ Board member, Anchali Anandanayagam, entertainment attorney and partner at Hudson Gavin Martin in Auckland, offered to host a reception for me and WIFT NZ members to meet and celebrate the holidays. Patricia Watson, leader of the Chapter helped organize it and sent out the invites. It was a wonderful evening – full of delicious tidbits – both culinary and industry-related.

The women were mostly veterans in the film and television industries. Some having their own production companies, others working for production companies NZ owned and US owned. They came from recognized entities such as Niaku Films, Pop Gun Filmmakers, and South Pacific Pictures. Producers, directors, general counsel, and more, these women were well versed in the NZ film and television space. What was most interesting was that their concerns echo ours here in the states – getting their film and TV projects financed and made, getting more opportunities for women, and getting through every day. As a more veteran group the women sought support from each other. They were enthusiastic about each other’s projects and more than one offered accolades on the other ladies in the room. About mid-way through the reception, I read them a letter of greeting from Susan Moss, Executive Director of WIFTA. However the biggest surprise was how much they knew about Atlanta and GA’s tax incentive. They are watching us closely and more than one told me about their desire to come and visit us here. Of course I gave them each an open invitation. Perhaps sometime soon we can have a WIFTA reception for a WIFT NZ member and return the hospitality.

They also spoke about their tax incentive, how it was taken away and then quickly reinstated when the industry started to dry up. Their incentive goes up to 20% (vs. our 30% if you use the GA peach logo) plus a possible 5% uplift based on a variety of factors. I explored this 5% uplift with a couple of the women – it seems not to be easy to get – only one movie so far has gotten it (Pete’s Dragon) – and it does require an MOU signed by the production company with the New Zealand government.   The film commission has quite a bit of information on their website so you can check it out.

I really enjoyed my visit with these women and have already connected with a few on LinkedIn to keep the conversation going. Women in Film and Television has international chapters all over the world. I highly recommend that if you travel internationally you consider reaching out to that country’s chapter. You never know who you may meet and where it may go. One more benefit to international travel.

Deborah Gonzalez, Esq. is an entertainment attorney licensed in New York and Georgia. Her practice focuses on intellectual property, arts & entertainment and media & technology law. She is a member of WIFTA and GPP; and past board member of WIFTA. Deborah is also Executive Director of Letterbox Legal, a new way of offering legal services to creative. You can find out more information at www.letterboxlegal.com or contact Deborah at dgartlaw@att.net.