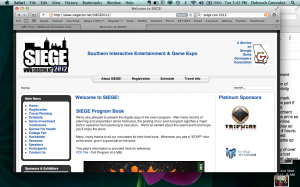 IP attorney Deborah Gonzalez attended and participated during the conference.  Three of the over 40 sessions are highlighted below.

The Legal Landscape: An Executive Briefing on Current Issues

Attorneys Rob Hassett (http://www.internetlegal.com/) and TJ Mihill (http://www.atlbusinesslawyers.com/atlanta-attorneys/thomas-j-mihill/) presented an excellent inaugural session of an “annual review and update of changes in legislation, rules, law suits, and torts that have occurred or have been introduced since last year’s SEIGE conference.” (Excerpt from SEIGE 2012 Program). Some key points:

Did you attend this year’s SEIGE?  What sessions did you go to and what did you learn?