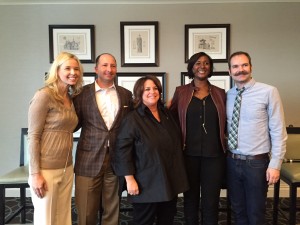 On February 3, 2016, Georgia Music Partners (http://georgiamusicpartners.org) partnered with Network of Women of the Buckhead Club (http://bit.ly/23LC2tk) to present a panel entitled “Music IS Economic Development” (http://bit.ly/1KsEnmd).

The event was promoted as follows:

It is proven that a vibrant music ecosystem sparks job creation, economic growth and tourism. On January 26th, Governor Nathan Deal and the Georgia Tourism Department declared 2016 “The Year of Georgia Music”. Industry panelists will discuss how growing Georgia’s music industry can create jobs, grow music tourism and keep music in our schools.

The panel consisted of four industry professionals and moderated by Jenn Hobby. Below I list the panelists, some background information about them, and some highlights from their conversation.

Brandon Bush, a composer who has performed on over 100 recordings to date, including GRAMMY® Award nominated and winning releases by John Mayer, Sugarland and Shawn Mullins. As a member of multi-platinum-selling bands Train and Sugarland, Brandon has toured the world.  His music has been featured in films, television and video games such as “Spiderman 2”, TCM and the iOS app “My Singing Monsters”. His latest Wagner inspired score can be heard behind the animated short, “Thundercluck”, currently touring film festivals worldwide.  He is a National Trustee of The Recording Academy. http://www.brandonbush.com

“The music industry is not having a problem – it is the sale of recorded music that has the problem. The industry is adapting to the technology.”

“How we consume [music] now is different.”

“How do we embrace intellectual property? There is a robust publishing industry here [in GA]. We need to fine tune.”

“[To make a difference] Get involved. It is about the community that you build.”

Tammy Hurt, a serial entrepreneur, is the managing partner of Placement Music, a boutique entertainment firm specializing in licensing, custom music and scoring for all forms of media. Highlights at Placement Music to date include, being commissioned by FOX Sports to create original, orchestral score for Super Bowl – twice. Additional credits include Paramount Pictures, SONY, CBS, NFL and NASCAR. She is a National Trustee of The Recording Academy (known widely for the GRAMMY® Awards) and a co-founder of Georgia Music Partners, the authority that grows and improves the music economy in Georgia. Tammy began playing drums at age 4 and has been playing professionally since the age of 14. Among her credits, she has recorded and performed live with the GRAMMY Award-winning Indigo Girls, producer Brendan O’Brien and engineer/mixer/producer Nick DiDia. http://placementmusic.com/about/tammy-hurt

“We need a Music Ecosystem.”

Note: GMP is sponsoring a Georgia Music Day at the Capitol on March 2, 2016. For more information and to register see: http://georgiamusicpartners.org/georgia-music-day-2016/.

LaRonda Sutton, Director of the Mayor’s Office of Entertainment. She is a member of the National Academy of Recording Artists and Sciences (NARAS), the National Association of Black Females Executives in Music and Entertainment (NABFEME), and Women in Film. http://www.atlantaga.gov/index.aspx?page=983

“The mastering of a music city report.” http://www.ifpi.org/Mastering-of-a-Music-City.php

“Atlanta is an entertainment hub.”

“We need a music destination in Georgia.”

Brian Hudson, has worked in and around state government relations and politics for more than 14 years. He has been named among the top five lobbyists in Georgia by James Magazine and as a “power player” by the Atlanta Journal Constitution. Since starting The Hudson Group, LLC in 2005, Hudson has guided major organizations such as The Home Depot, DIRECTV, Dish Network, HP, City of Atlanta, Zoo Atlanta and others through various legislative, political and regulatory issues at the Georgia State Capitol Hudson currently serves on the board of directors for the Georgia Professional Lobbyists Association, on the advisory board of Georgia Music Partners and is active with the Georgia Chamber Governmental Affairs Council.  He is a graduate of The University of Georgia where he studied political science. In addition to his political interests, Brian is an accomplished drummer, musician and educator. http://www.thehudsongroupllc.com.

“Music is an economic driver.”

“We need to be about inclusiveness.”

“Lobbying for a tax-free holiday for musical instruments.”

Are you involved in the Georgia music industry? Whether formally or not, ask yourself the question the panelists were first asked at the beginning of the event: What was your first concert? As you remember the who, where, and the specifics of the when, I think you can agree that music can have a hold over us. In that case then we can say that we are all part of Georgia’s music industry.

Hope to see you at GA Music Day on March 2nd! #gamusic