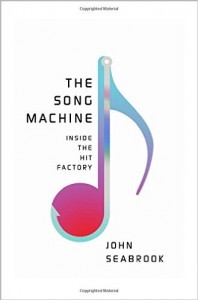 There are two main schools of thought of how a song is written – music and lyrics first (think country, folk and Americana) or beat and hook (think hip hop, pop, and rap). John Seabrook gives us a behind the scenes look at the latter through fascinating stories of bigger than life characters and a historical romp through musical history. He is also helped by the fact that half of these stories take place outside the United States – specifically Sweden and Korea – which offers an opportunity to reflect on just really what is American (US) music, how is it made, and who profits from it and why?

For Seabrook the singer-songwriter is mostly gone in mainstream music, replaced by a top-liner who devises “hooks” for big-name artists to enhance their mass appeal. These top-liners are mainly in the shadows; their credit is hidden, as the market clamors to see the “performer.” We have all heard of the origins of many Taylor Swift songs – break her heart and she just “writes your name” into her song. Rihanna and Beyoncé however, have others do that dirty work. Meghan Trainor – was a top-liner who crossed over to performer, same as Pharrell Williams. But they are from a rare breed.

Seabrook also emphasizes the cyclical nature of music – our tastes are generational and the next generation never wants to admit they enjoy the music of the previous generation – but I will admit I love Beatles songs even though I was a teenager many years after they hit it big.

Seabrook’s book outlines one approach to the business of music but it is not the only one. It does not have to be. In this time of so many options thanks to technology we don’t have to follow one path only. If you are in the music business this is a good book to read to understand some of what is happening in the industry you choose to be in.

Some quotes from the book:

For a record man like Davis, hits are the whole ball game. A pop star is nothing without a hit, and a pop career depends on a “continuity of hits,” a favorite Davis phrase. (pg. 12)

The nature of pop culture: people tend to embrace one thing, then get tired of it and want something else. So both radio programmers and the consumer are chasing the next thing and influencing each other. (‘Tom Poleman, NY’s Z-100) (pg. 121)

But because the money is in ticket sales, not record sales, nonstop touring is the norm, and record making has to be fit into breaks in the grueling schedule. (pg. 214)

The playlist is the album of the streaming world. (pg. 287)

For more on this book: